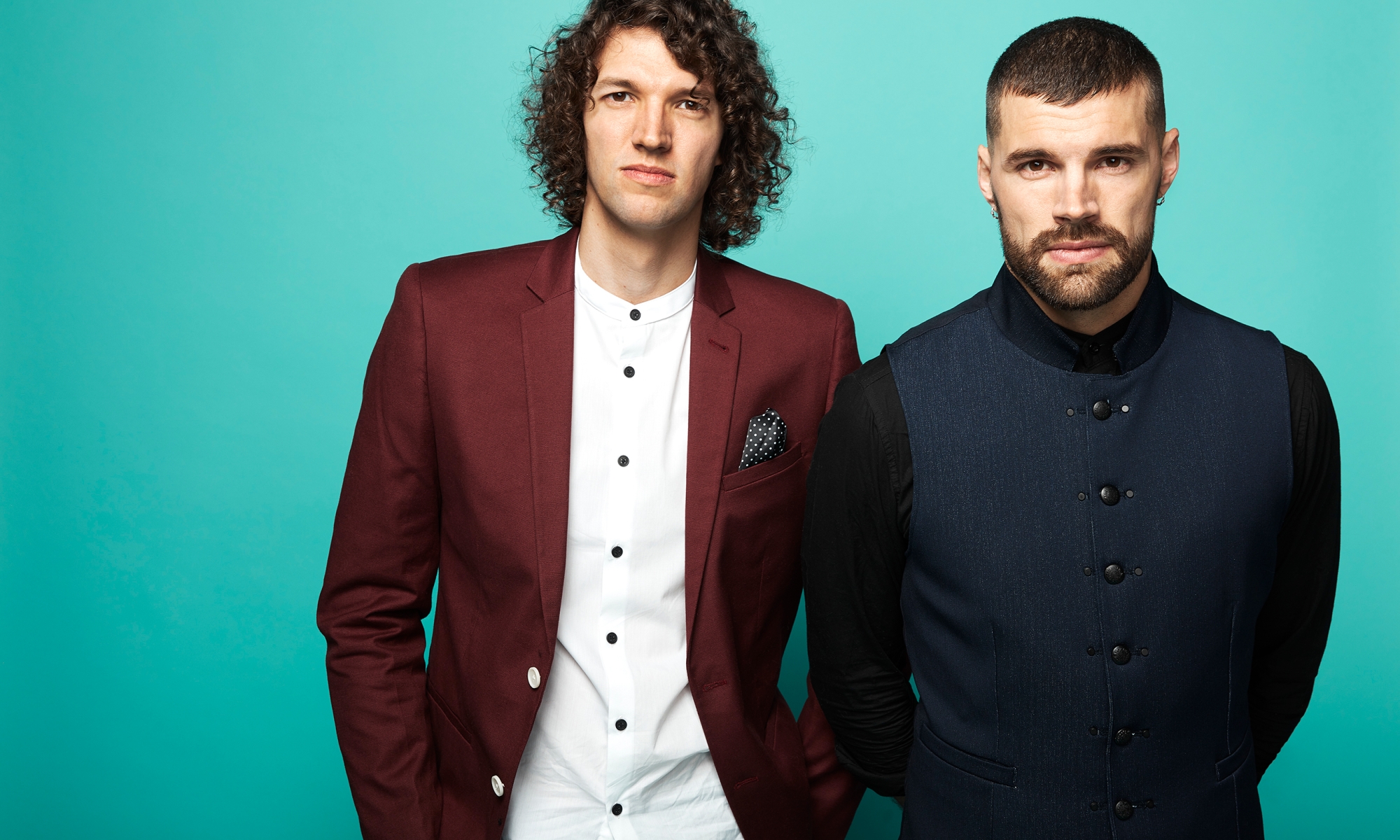 From his cheerful ‘Hello’ to his gracious ‘Goodbye’ Luke Smallbone, of Christian band ‘For King and Country’ was a joy to interview for an exclusive look into the band’s newly released album, “Burn the Ships.” Inspired by the challenges and triumphs of his own journey, in conjunction with that of his brother, Joel Smallbone, the album has highs and lows like the roller coaster called ‘life’ that they face daily.

During the making of this album the Smallbone brothers had been on tour playing all over the country when Luke Smallbone had received a call from his beloved pregnant wife, Courtney, saying something she had never said before.

“She said ‘I need you to come home,’” Smallbone said.

Heartbroken and worried, her next words on the phone were “I’ve been taking this medicine, and I just can’t stop.”

Prescribed medication to fight the nausea that accompanied her pregnancy with their second son Phoenix, Smallbone’s wife knew that she needed help and leaned on her husband for his unfailing support. Over the course of the next two weeks, Smallbone took her to a mental health facility every day to work through what she was feeling.

With a renewed spirit, their little family returned home one day and Smallbone’s wife let him know that she needed to flush the pills that were left. The pills, that were symbolic of the shame and guilt that she was feeling about her dependency, were the spark that reminded Luke Smallbone of a story he had heard before.

A story about an explorer whose men did not want to explore the horizon but would rather have stayed on the ships. The explorer waited a few days and then called every man ashore, and when all were on land, he gave the command to the generals to burn the ships.

“The explorer said ‘We won’t move back, we won’t retreat, we are going to move forward,” Smallbone said.

Flushing the pills was the moment his wife ‘burned the ships’ and made the decision to push forward. This turning point sparked the inspiration for the album name and for the single “Burn the Ships”.

Now, they are living by the philosophy that is so eloquently put into song lyrics like ‘We can dance upon the heartache, so light a match, leave the past, burn the ships and don’t you look back.’ Wanting the song to be about redemption and how you can move forward, Smallbone is excited to see that people can resonate with it and known that they are not alone in their battles.

“[The songs in the album were] birthed out of very difficult seasons, and to see them become hopeful for someone else is very satisfying,” Smallbone said.

While most of the music that For King and Country write and shares with the public is very personal and close to their hearts, it isn’t an issue for Smallbone. During a short period in the beginning of his career, Smallbone tried to write music he thought would inspire others, but it took some time to realize that his best songs were ones that he felt that he needed to hear too.

Smallbone joked on the phone that he isn’t good enough to write songs about things that he doesn’t care about, so many of his best songs are those that come from his heart. Believing that a composition or even simply a lyric, can reach many who were previously in a dark place has inspired so many other songs to be written.

“The reason you get involved in music is because you believe that music, at heart, can change the trajectory of someone’s life,” Smallbone said. “There’s a tremendous amount of hope in knowing that you are designed for purpose and significance in life.”

It is hard sharing stories that are so personal, but he does it because he wants people to know they are not alone. However, Smallbone acknowledges the challenges that come with bearing a piece of your soul to the world.

“You are giving a piece of yourself, but I think art deserves that type of sacrifice, it is significant.” Smallbone said.

Music lives on forever in the platform that it is delivered in, and it is with this a sense of importance that For King and Country as a whole takes the time to make sure each song is given careful consideration before it goes into an album, because to them music is powerful.

“It’s important to view music with that amount of power and that mount of respect, and if it takes vulnerability to achieve that, then it’s a very worthy sacrifice to make.” Luke Smallbone said.

Though the level of transparency is upped on the newest tour, there are somethings that haven’t changed. Every show is preceded by a devotional time led by the Smallbone brothers’ father and a gathering takes place to combat any splintering that can occur during the mass amounts of travel they endure on tour.

Always fighting to make sure that there is enough time devoted to marriages, family, fun, and music equally is a challenge that the brothers gladly take on in their efforts to make a difference in the world through music. That said Luke Smallbone makes it clear that they always make time for family, fun and games. Noting that most of their songs are drawn from personal experiences Small bone cracks a light-hearted joke over the phone.

“If all I do is work, then I’ve got nothing to write about,” Smallbone laughs. “It’s important to live life [too].”

With the ‘Burn the Ships’ tour coming to an end in November, the brothers are gearing up for the ‘Little Drummer Boy: Christmas tour’ featuring Zach Williams that will start in December. Their current tour has been filled with memories from all over, including the chorus of voices singing out their newly released single ‘Joy’ that occured during their European tour.

The song had just released a few days prior to their show and yet the audience was filled the venue with a chorus of voices singing the lyrics “I choose joy, let it move you.”

“It was a very powerful and uplifting moment for us,” Luke Smallbone said. “And it’s moments like that where you see people that live on another continent, where you release a song, and three or four days later it becomes their anthem.”

That said, even with all the wonderful memories that this tour has brought they are ready for the Christmas tour to start. Coming up on its fourth year, this tour has become something of a tradition for the brothers and featured singer Zach Williams. There is 10 to 12 shows every year, and each is more uplifting than the next for the band.

“Christmas tours are interesting, because you are singing some of the greatest songs ever written,” Smallbone expressed. “You’re playing the songs that most people know you by, and basically every song that you sing people are familiar with.”

The melodic tones of the brothers and Zach Williams are always accompanied by the cheers of the crowd crying out the lyrics that touch their hearts the most. However, if you had told Luke Smallbone in his junior year of highschool that he would be a musician spreading music and joy everywhere, he wouldn’t have been too sure.

His mother, however, was very confident, that after sustaining a torn ACL injury that he would find something to fill the new void in his life. This void was filled by music just a year or so later when his brother, Joel Smallbone, wanted to start working on some melodies.

Melodies snowballed into songs that eventually got the brothers gigs. Starting out at mother-daughter conferences, not sure if music was going to take off at all, their mother inspired them to use their voices as men to comment on the value of a woman.

“Culture says for [women] to talk and act like you’re worth nothing more than a penny, but we believe there is a God who says [that] you are priceless.” Luke Smallbone said.

The ‘PRICELESS’ movement was started from that day forward, inspiring a movie starring the brothers that focused on human trafficking and raising awareness to the impossible standards in today’s world for women.

From there the movement grew and the launch of the song “Priceless” aired in 2015, just before the movie in 2016. There are women everywhere wearing a bracelet or necklace stating that they are priceless. With their voices being heard and their songs being sung, For King and Country is making strides in their goals to touch the hearts and lives of people around the world.

Now, with renewed high hopes for the Priceless movement, “Burn the Ships” and the upcoming show where For King and Country is hitting the stage in Cleveland at the Wolstein Center on Dec. 6, Luke Smallbone’s voice rings clear as he bids his goodbyes over the phone.

“Hopefully, we get to meet again,” Smallbone said.

One Reply to “For King and Country exclusive Interview”

CSU’s police review task force has buttoned up their investigation and released their final report for CSU 2.0 plan. The Cauldron has outlined their top five recommendations for reform.⁠
The CSU women's softball team swept the two game series aginst the College of Chrleston Cougars. They will look to keep the ball rolling as they face Purdue University Fort Wayne for a four-game set in March following the cancellation of the four games against Presbyterian.⁠
In this issue, A & E Editor Trinity Stevens writes the first article in a series tracking the progress of CSU art students progress in creation of a public mural 🧑‍🎨🎨
Issue 9 of The Cauldron is out now! Link in Bio
CSU Students we want to hear from you! Got an idea for a story or new content? Our DMs are open!
Despite unprecedented challenges, CSU’s swim team dives into the 2020-21 season in full force.
%d bloggers like this: