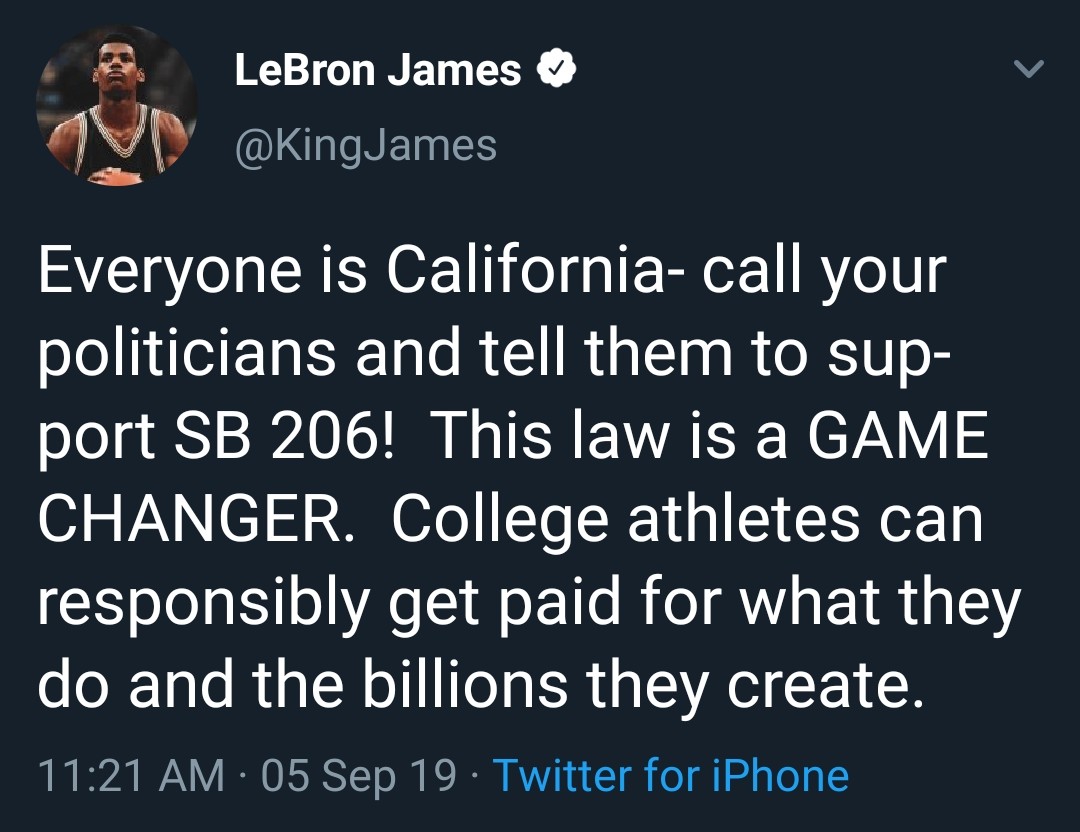 Athletes don’t make money for their schools —  let’s give them more!

California NCAA athletes soon may be allowed to make money off of endorsements, according to a new bill passed by the California State Legislator.

As stated in Senate Bill 206, California collegiate athletes will no longer be prevented from “earning compensation as a result of the use of the student’s name, image, or likeness.”

In other words, athletes who have already received admission to their dream schools, along with full-ride scholarships worth hundreds of thousands of dollars in tuition, fees and room and board, are finally being compensated properly under this new bill. Give me a break.

As someone who graduated valedictorian of his high school, ran cross country and track for six years, applied to every scholarship he was eligible for and made every effort imaginable to defray the costs of college, I can’t help but feel insulted by this legislation.

Despite these efforts, I’m still struggling to pay the costs of an affordable, state university, even with my tuition covered by a scholarship based on my academic merit.

Meanwhile, athletes want a larger share of compensation for participating in activities that are, at most, loosely related to the purpose of attending a university. How successfully kicking a field goal is connected to obtaining a college degree is beyond me.

But then again, what do I know? Your aptitude for college may just as easily be displayed by kicking a ball as it is by receiving a 30 on the ACT.

Undoubtedly, the bill is gaining popularity among professional athletes. None other than Cleveland’s (former) favorite athlete, LeBron James, had something to say about the bill. In a tweet a little over two weeks ago, the NBA all-star urged California voters to contact their politicians, claiming that student athletes create “billions” for the economy.

As convenient as lying about the profitability of college athletics programs is, a majority of schools subsidize these programs because their revenue doesn’t match their expenses.

These net losses don’t just occur at small, Division III schools either; large, Division I colleges and universities, including Cleveland State University, are in the mix as well. According to an NCAA study conducted in 2014, all but 20 of the Football Bowl Subdivision schools made net losses on their programs.

With that in mind, you might even say athletes are overcompensated — even when they aren’t creating their own line of signature shoes.

The idiocy doesn’t stop here, though. Under the bill’s provisions, “earning compensation from the use of a student’s name, image, or likeness shall not affect the student’s scholarship eligibility.”

In the event that California Gov. Gavin Newsom, does sign the bill, I can only hope that it doesn’t make its way east.

Cleveland State has a food pantry to help students who are struggling to make ends meet, as I’m sure is also true of many universities in California. But by all means, allow those same people to bankroll athletic scholarships that have no direct effect on the value of their education.

Cleveland State students are not immune to this issue, either. Students pay a little over $700 per year on athletics alone. In total, Cleveland State’s athletic budget for the 2018-2019 school year was a little over $12 million, according to the unversity’s budget books. There’s little reason to believe the 2019-2020 budget for the school will look very different once it’s released.

Now, this isn’t to say there’s no solution to this issue. If the bill has to exist in some limited form, remove the scholarship eligibility clause. After all, why do student athletes need scholarships if they can make millions off of shoe deals and soft drink commercials?

Don’t get me wrong. I’m no enemy of economic freedom, nor do I think all college athletes are greedy by any measure. They’re just trying to pay their grossly inflated tuition like the rest of us. However, if they want to be treated like professionals, have them pay for their stuff. It’s not like LeBron charges people walking past Staples Center because he’s just so talented, but that seems to be the very same logic applied to college athletics.

To paraphrase the old saying, you can’t have your scholarships and make money, too.