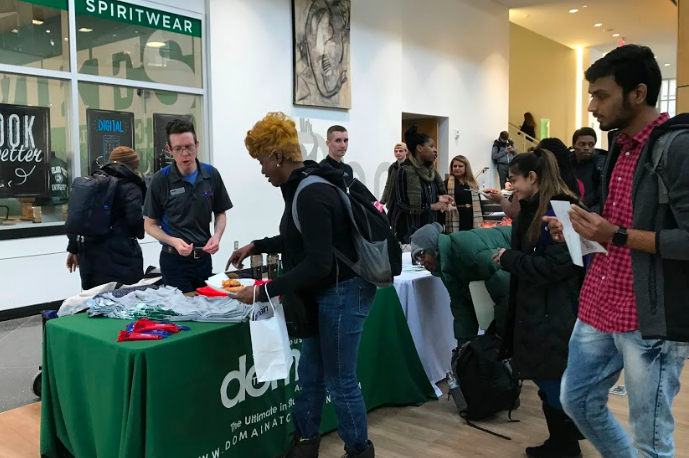 Past senator projects have included the textbook drive, creating a multi-faith room and supplying science sets to the Michael Schwartz Library. Senators could work on their projects individually or choose partners to divide the work on bigger initiatives.

Starting this semester, the senate divided into larger groups for projects led by facilitators on the SGA executive board and cabinet. The Veterans’ Sock Drive and third annual SGA Housing Fair were the first of these group projects.

In the past, the SGA Housing Fair was a project two senators shared. This year, seven senators and the SGA vice president, Juliana Kosik, tackled the project. Aside from student attendance, not much changed, according to Samia Shaheen, president of SGA.

“Our outlook this semester has been quality over quantity,” Shaheen said. “So [we’re] making sure that you have senators contributing to one project to make it the best it can be rather than dispersing seven different projects that are not exactly beneficial to the student body or are just incomplete by the time the semester ends.”

The decision to start doing larger, group projects was a mutual decision between the SGA executive board, Speaker Maram Eadeh and Erykah Betterson, the director of policies and procedures. Most of the senate began their first semester with SGA in the fall, and the group projects are structured to help new senators adjust to their roles as student representatives, according to Shaheen.

“We decided to use this structure as a guinea pig just to see how it would work,” Shaheen said. “It was challenging to explain to students that the magnitude and the capacity of their project needs to reach their constituents.”

“Each role in student government continues to reach their respective constituency,” Shaheen said. “So we require that all senators in their roles in their colleges do their fair share of outreach to make sure that the students in their constituency know of those events.”

Shaheen also acknowledged that SGA’s approach to senator projects this semester may not continue this way in the future.

“It might change next year,” Shaheen said. “Of course, the new executive board, whichever one comes in, could certainly change that structure, and it might go back to the old structure. Because of the challenge of having a whole entire new senate, we were left with the choice that putting senators in groups to understand the dynamics of SGA gets their foot in the door for the next term they serve.”

Other group projects for the semester include the SGA Townhall, tentatively scheduled for April 4, and updating the SGA bylaws and constitution.

The Cauldron asked Betterson, who is facilitating SGA’s bylaws and constitution changes, when work on that project began, how many senators are working on the project and where they are in that process after the senate meeting on Friday, March 8. Betterson agreed to email that information, but The Cauldron did not receive any answers even after an attempt to follow up on it was made.

The only mention of updates to the constitution in any of SGA’s meeting minutes so far this academic year were made at the Nov. 16, 2018 meeting when Eadeh announced that revisions were being done to the document and suggestions should be emailed to Betterson.

Updating the bylaws and constitution is tasked to one of SGA’s six standing committees, according to SGA’s currently recognized constitution.

“The Investigation and Legislation Committee (I&L) shall serve at the call of any E-Board member or the SGA Senate,” the organization’s constitution states. “This committee is charged with writing or reviewing legislation and undertaking investigations of issues that are important to SGA or the CSU student body.”

The head of the I&L committee is not labelled on SGA’s 2018-2019 committee appointments list, available on their OrgSync page, the way it has been in prior years. However, the organization’s constitution does specify the committee’s chair.

“The I&L Committee shall be chaired by the Speaker of the Senate,” the document explains.

The constitution had changes ratified by the senate last year at the March 2, 2018 meeting after Cameron Caputi, former SGA speaker, led the I&L committee through a round of changes, according to the meeting’s posted minutes on OrgSync.

These changes, however, did not finish the entire finalization process.

While SGA tackles these team projects for the first time, independent projects are still an option senators are able to choose.

“We are completely in support for a student that wants to spearhead their own project, and we encourage them to do so if they have an idea in mind,” Shaheen explained.

One individual project has Jovanna Hanna, at-large senator, currently working alongside Michael Schwartz librarian Mandi Goodsett to grant an Open Textbook Hero Award for faculty who utilize the free textbooks in their courses, according to Shaheen.

Completing an individual project satisfies senators’ requirement to do a project to receive their scholarship, and the senator does not need to also work on a group project, Shaheen explained.

While Shaheen acknowledged that the group projects mean less projects will be done, she explained that the new system held SGA accountable for getting the projects done in a way that the individual projects couldn’t.

“I think that when you place senators in groups to complete projects and tackle larger issues, you’re better able to hold them accountable for the work that they’re doing,” Shaheen said.

CSU Students we want to hear from you! Got an idea for a story or new content? Our DMs are open!
Despite unprecedented challenges, CSU’s swim team dives into the 2020-21 season in full force.
Check out this week's weekly recap on our site! ⁠
From a beloved comic strip character to a sentient pea, Cleveland State University has hosted a total of 5 diverse mascots since 1923. While all hold a special place in CSU history and in our hearts, The Cauldron's recently published it's ranking from worst to best. Where does your favorite mascot rank? ⁠
Meet Alexis Britford, dancer and CSU adjunct faculty member. Alexis’s dance journey has had its challenges, but it has also had its rewards. Check the link in bio to read more about Alexis' dance journey.⁠
John McLendon’s legacy runs deep through the realm of intercollegiate athletics and the game of basketball. He is a Theodore Roosevelt Award recipient, Naismith Basketball, Cleveland State University Athletics and National Collegiate Basketball Hall of Fame member, and made history by becoming the first African American head basketball coach at a predominately white institution (PWI) and a professional sports team. To read more about the former Cleveland State basketball head coach, check the link in our bio ⁠